CHARLESTON, W.Va. — A Kanawha County man is the victim of a deadly shooting incident on I-77 in Charleston from Friday night.

Charleston Police say Antwan Curnell, 28, of Dunbar suffered a gunshot wound as he was driving on I-77 near the Westmoreland exit. The incident was in the northbound lanes just north of the I-77/64 slit in the Capital City.

Curnell was driving a Toyota 4-Runner and suffered the gunshot wound about 9:10 p.m. Friday causing him to lose control and crash. He was pronounced dead later at Charleston Area Medical Center General Hospital. Two adult female passengers were in the vehicle with Curnell at the time of the shooting, neither was hit by the gunfire.

The shooter is unknown, but police say the fatal shot was fired from another moving vehicle on the interstate. The suspect vehicle is a blue car, no make or model known. Police say it will have damage to the front end and passenger side as a result of the incident.

Anyone with information is asked to call the Charleston Police Department at 304-348-8111. Callers can remain anonymous. 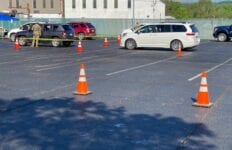