ST. ALBANS, W.Va. — There will be a unit from the West Virginia National Guard in Washington, D.C. for President-elect Joe Biden’s inauguration next week but it won’t be a new assignment.

“This is the same support we provide for any presidential inauguration or State of the Union address for the National Capitol Region,” Nelson told MetroNews Monday.

There will be more Guard members than usual in Washington next week because of the recent violence. National Guard Bureau Chief Army Gen. Daniel Hokanson announced Monday that 10,000 troops from several states would be deployed by the weekend and it’s possible another 5,000 could be requested from other states.

Hokanson said the requests for the additional help are coming from the Secret Service, the Park Police and the Capitol Police.

A final decision hasn’t been made on whether the Guard members will be carrying rifles or small handguns.

The West Virginia unit will be directly supporting the District of Columbia Fire and Emergency Medical Services and the 33rd Civil Support Team, Nelson said. 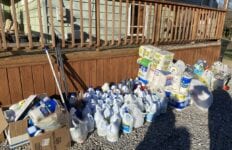