RAVENSWOOD, W.Va. — The doors are officially open to the new Ravenswood Municipal Building.

The city had been in the process of moving services such as the water and sewer departments along with the city clerks office to the first floor of the 1 Wall Street building before opening its doors on Monday.

Ravenswood Mayor Josh Miller said the move had been a long time coming.

Ravenswood City Council approved a 10-year lease agreement with the Jackson County Development Authority for $500,000. Miller told MetroNews that the agreement is a good deal because the building is being insured for $4.4 million.

Miller has a goal of paying off the new building, which used to be a BB&T bank, in 3 to 5 years by using the 1-percent municipal sales tax and payments from other tenants inside.

The building has three floors, which Miller said the city will occupy two of them. Once tenants for the third floor are signed on, Ravenswood will use that revenue to go directly into the building’s lease payment.

The second floor of the new building is planned to house the Ravenswood Police Department and Council Chamber/Municipal Court once renovations are done in Spring 2020. Right now, those services are located on the third floor.

Being a former bank, Miller said citizens don’t even have to walk into the building if they don’t want to when paying a bill. There is a drive-thru option that opened Monday.

Miller is excited about the physical location of the new building, within walking distance of the city park, library, shopping plaza and more. He also said the old location on 212 Walnut Street had issues that would have cost more to maintain and renovate than moving into a newer building. 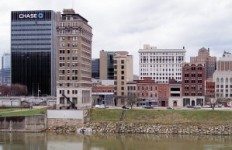 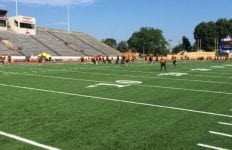