Jones was a World War II veteran where he served in the Navy. He returned from the war to direct the family business, Amherst Industries, located at Port Amherst on the Kanawha River just east of Charleston at Malden. He moved coal and other materials up and down the Kanawha and other rivers with tow boats and barges and other equipment.

“He was an absolute icon,” Kanawha County Commission President Kent Carper said Monday. “He was a philanthropist. The type of person that would do anything for anyone.”

U.S. Senator Joe Manchin said he enjoyed having Jones as a friend.

“Charlie was a regular Renaissance man, and his zest for innovation never waned throughout his long life – a World War II Veteran, a legendary businessman, coal miner, farmer, riverboat captain, and a servant of the community who was adored by all. His influence and legacy will remain in our hearts and in the hearts of countless West Virginians forever,” Manchin said in a statement.

“So sad to hear of the passing of Charlie Jones, a veteran, Distinguished West Virginian, National Rivers Hall of Fame Achievement Award Winner, riverman, husband, father, and my friend. 101 years of giving for others,” Capito said.

Jones spent many years on the Yeager Airport Board. Carper remembers Jones speaking out for the airport when there were efforts to close it and establish a regional airport between Charleston and Huntington.

“Charlie Jones stood up and was counted,” Carper said. “His business depended on some of these folks but Mr. Jones loved the airport, loved the transportation and he could see beyond the political reckoning of some people and he did what was right.”

At a party for his 100th birthday back on June 4, 2018 a pair of proclamations were read praising Jones for his work for making the state’s waterways more navigable. He was asked how he felt about the big celebration of his birthday and he said, “I’ll be here the next day.” Reports indicated Jones did report to Port Amherst for work on June 5.

“He would do any job that he could possibly ask someone else to do—he would do it first. He was the first one to get to work and the last one to leave,” Carper said. “He had a vision. He could see things. He was so successful,” Carper said.

According to a 2009 story in Waterways Journal, Jones was involved in many industry groups including The American Waterways Operators, Ohio Valley Improvement Association, DINAMO, Sons & Daughters of Pioneer Rivermen and the Seamen’s Church Institute, from which he received the Lifetime Achievement Award in 2003. In 2001, Jones received the National Rivers Hall of Fame Achievement Award. He also served as chairman for three years of the Inland Waterways User Board and was given chairman emeritus status. In 2008 he received the Distinguished West Virginian Award and induction into the Coal Mining Hall of Fame. Also active in his community, he is scheduled to receive the “Spirit of the Valley” award August 12, presented annually by the YMCA of Kanawha Valley, for his long support of the organization’s youth programs. Jones holds a Master of Towing Vessels, Western Rivers, license issued by the U.S. Coast Guard.

That same article asked Jones what he wanted written on his gravestone.

“Have a lovely day. I’ll see you in the morning,” Jones said. 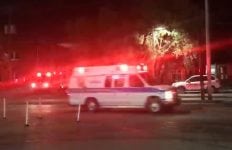