Hess’ education career will end on Thursday with his retirement from the superintendent position. He has led the school system since 2006.

Hess told MetroNews affiliate WMOV-AM that he is proud of the district’s progress over his 16 years of leadership.

Hess added the progress would not have happened without the efforts of Jackson County educators and community members.

“I hope it was a period of improvement over these last 16 years,” he said. 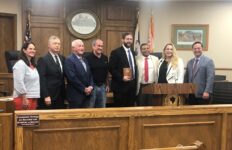