CHARLESTON, W.Va. — A Charleston man is facing charges of failure to render aid and possession with intent after an investigation in the suspicious death of a woman on August 28.

According to Charleston Police, William Leo Campbell, 40, was the last person to see Kayla Wheeler alive when she became unresponsive after they were using methamphetamine.

Investigators found he didn’t call for help because he believed there was an active warrant for his arrest.

The criminal complaint stated that Campbell told police they were using meth when she passed out. It further stated that he said he placed her in a bathtub in cold water to try to get her body temperature down.

Campbell is being held on a $10,000 bond or 10 percent cash at South Central Regional Jail. 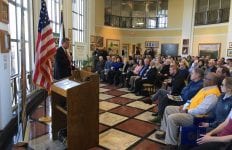